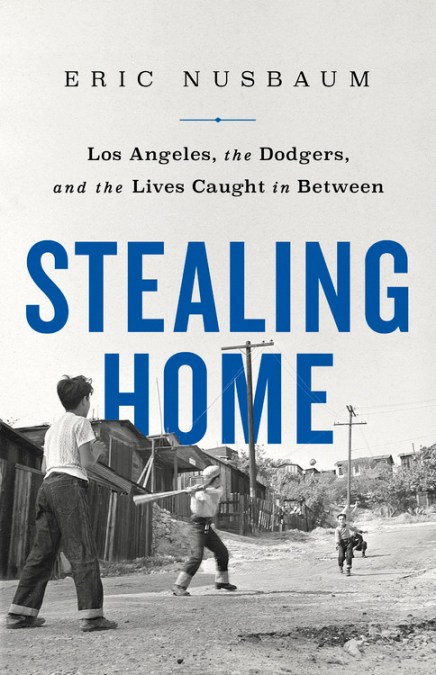 by Eric Nusbaum
A story about baseball, family, the American Dream, and the fight to turn Los Angeles into a big league city.
Dodger Stadium is an American icon. But the story of how it came to be goes far beyond baseball. The hills that cradle the stadium were once home to three vibrant Mexican American communities. In the early 1950s, those communities were condemned to make way for a utopian public housing project. Then, in a remarkable turn, public housing in the city was defeated amidst a Red Scare conspiracy.
Instead of getting their homes back, the remaining residents saw the city sell their land to Walter O’Malley, the owner of the Brooklyn Dodgers. Now LA would be getting a different sort of utopian fantasy — a glittering, ultra-modern stadium.
But before Dodger Stadium could be built, the city would have to face down the neighborhood’s families — including one, the Aréchigas, who refused to yield their home. The ensuing confrontation captivated the nation – and the divisive outcome still echoes through Los Angeles today. 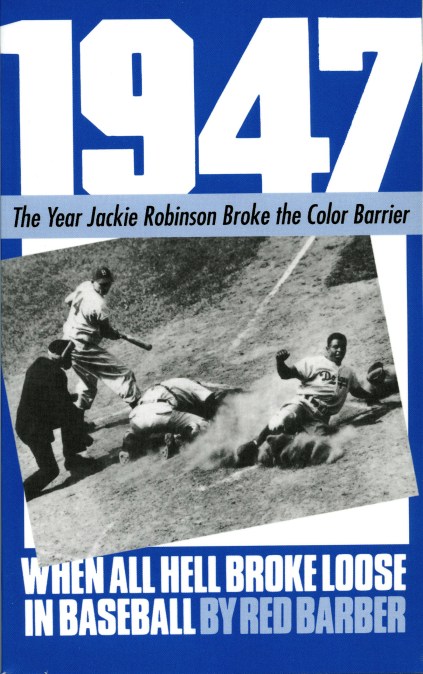 by Red Barber
When Jackie Robinson was penciled into the lineup for the Brooklyn Dodgers in 1947, America’s national pastime and America’s future changed forever. How much is reflected in a remark Martin Luther King Jr. made to Don Newcombe: “You’ll never know what you and Jackie and Roy did to make it possible to do my job.” Red Barber was perfectly situated to observe this drama. Broadcaster for the Dodgers, friend of Branch Rickey-who confided in him before and during the year of decision-and keen student of the game and the behavior of its players, Red held the microphone as the story unfolded with a cast of characters that included baseball immortals Duke Snyder, Leo Durocher, Pee Wee Reese, Peter Reiser, Larry McPhail, and Joe DiMaggio. Towering above them all are Jackie Robinson and Branch Rickey-who together made baseball and American history and whose courage and toughness Red Barber captures so beautifully in this book. 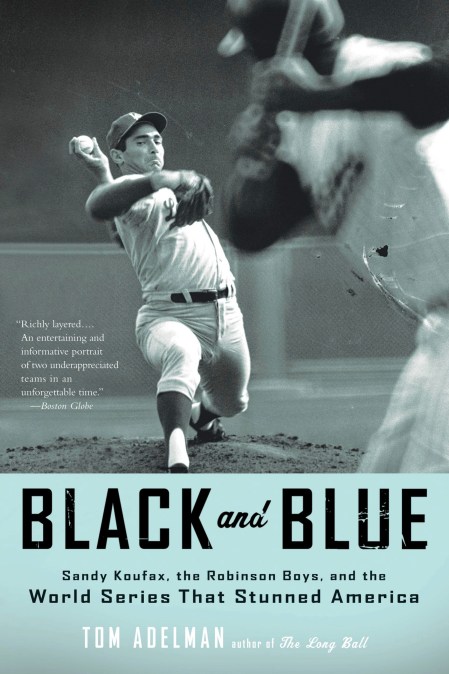 by Tom Adelman
Baltimore 1966. Suffering through a summer of heated racial animosity, baseball fans look hungrily to the Orioles to bring new respect to their once-great city. Their young team of no-name kids and promising prospects appears to have been strengthened by the recent addition of veteran slugger Frank Robinson – but the former National League MVP is bad news (it is rumored), washed up and unreliable.

To lay these rumors to rest, Robby must play harder than he’s ever played before. In his first year in the league, against unfamiliar pitchers in new ballparks, he resoundingly proves his worth — to his city, his team, and himself — by delivering a Triple Crown performance. Aided by a hilarious and memorable cast of characters — the gentlemanly southerner Brooks Robinson and the wickedly inventive prankster Moe Drabowsky, a pitching staff of unknown kids like Jim Palmer and Dave McNally, and a gargantuan yet nimble fielder called Boog” — Frank Robinson delivers his new team to its first World Series. But before they take it all, the Orioles must unseat the reigning champion Los Angeles Dodgers.

With America’s cities in mounting turmoil, Los Angeles seems like another world altogether, a sunny land of surfers and movie stars. Comfortably dwelling in this higher plane is pitching ace Sandy Koufax, arguably the greatest lefthander in baseball history, behind whom the Dodgers have won two of the previous three World Series, replacing the Yankees as the sport’s dominant team. Though battling agonizing arthritis throughout the season, the godlike Koufax has nonetheless persevered to win twenty-seven games in 1966, a personal best. Few outside Baltimore give the Orioles more than a fighting chance against such series veterans as Koufax, Don Drysdale, Maury Wills, Tommy Davis, and the rest. Experts are betting that the Dodgers can sweep it in four.

“What transpires instead astonishes the nation, as the greatest pitching performance in World Series history is capped by a redemption beyond imagining.” — Book Jacket 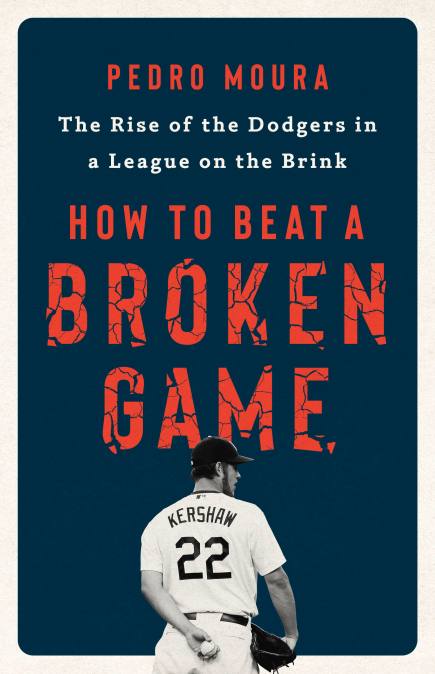 How to Beat a Broken Game

After years of frustrating playoff runs, the Los Angeles Dodgers finally reclaimed the World Series trophy after more than thirty years, led by star pitcher Clayton Kershaw, electric outfielder Mookie Betts, and a bevy of impressive young players assembled by team president Andrew Friedman. No team is better positioned to win now and in the future.

Yet winning at modern baseball is nothing like it was even twenty years ago. In the years since the famous Moneyball revolution, baseball has grown to look less like a sport than a Wall Street firm that traded its boiler room for a field. Teams relentlessly chase every tiny advantage to win games and make money, even as it hurts fans, TV ratings, and players, courting bigger problems in the long run.

This dramatic and insightful book takes you into the clubhouse with the championship players, as well as into the offices where teams constantly seek new ways to win—even when it hurts the game. How to Beat a Broken Game shows not only what it takes to win, but what it will take to save the sport. 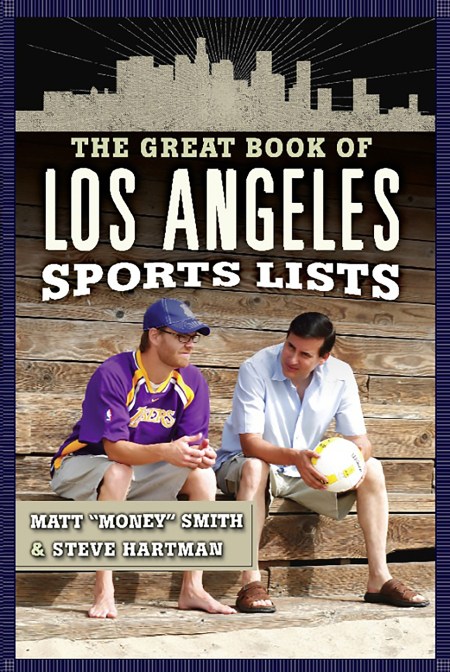 by Steve Hartman by Matt “Money” Smith
With multiple franchises in pro sports — Lakers and Clippers (NBA), Dodgers and Angels (MLB), and Kings and Ducks (NHL) — plus major interest in UCLA and USC athletics, LA’s fans are some of the most sports-crazed in the country. Matt “Money” Smith and Steve Hartman — two of the leading authorities on So-Cal sports — stir up the scene with this entertaining compilation, including guest lists from Kobe Bryant, Phil Jackson, Luc Robitaille, Jeanie Buss, Steve Garvey, and many more. 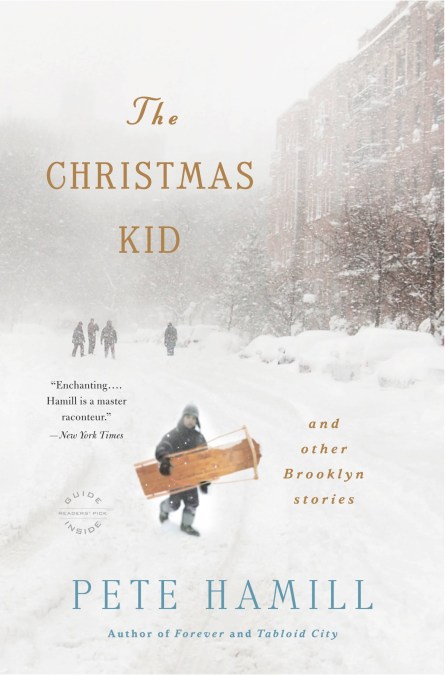 by Pete Hamill
A collection of short stories about a long-gone Brooklyn from the legendary New York writer Pete Hamill.

Pete Hamill's collected stories about Brooklyn present a New York almost lost but not forgotten. They read like messages from a vanished age, brimming with nostalgia: for the world after the war, the days of the Dodgers and Giants, and even, for some, the years of Prohibition and the Depression.

The Christmas Kid is vintage Hamill. Set in the borough where he was born and raised, it is a must-read for his many fans, for all who love New York, and for anyone who seeks to understand the world today through the lens of the world that once was.

"Hamill, a master raconteur, mines his own roots in this enchanting new anthology." —New York Times 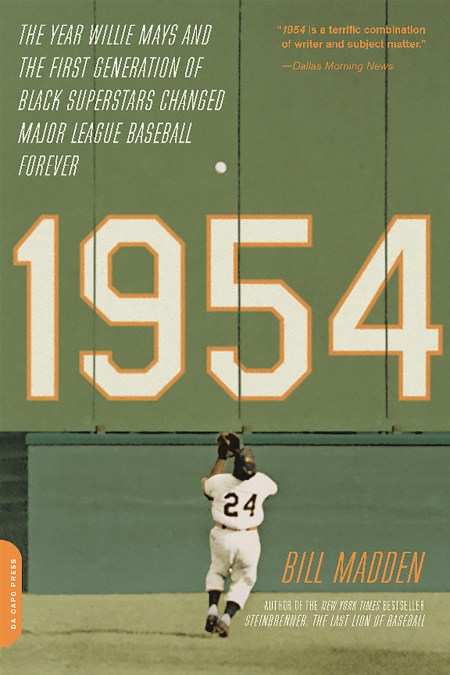 Award-winning New York Times bestselling author Bill Madden delivers the first major book to fully examine the 1954 baseball season, drawn largely from exclusive recent interviews with the major players themselves, including Willie Mays and Larry Doby as well as New York baseball legends from that era: Yogi Berra and Whitey Ford of the Yankees, Monte Irvin of the Giants, and Carl Erskine of the Dodgers. 1954 transports readers across the baseball landscape of the time as future superstars such as Hank Aaron, Ernie Banks, and others entered the leagues and continued to integrate the sport. Weaving together the narrative of one of baseball’s greatest seasons wit the racially charged events of that year—the same in which the US Supreme Court unanimously ruled that segregation of the races be outlawed in America’s public schools—1954 demonstrates how our national pastime was actually ahead of the curve in terms of the acceptance of black Americans, while the nation at large continued to struggle with tolerance. 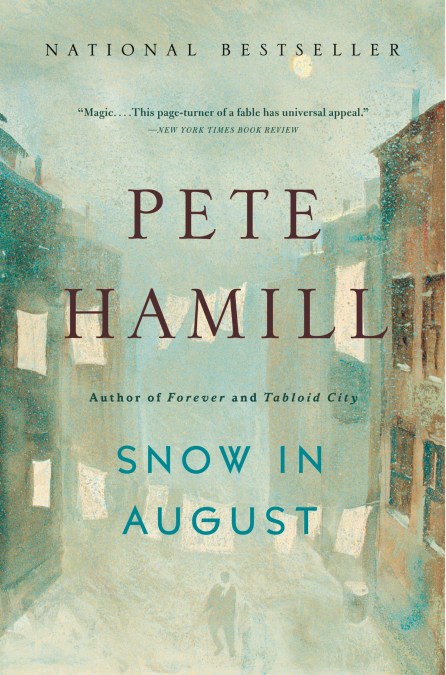 by Pete Hamill
Deeply affecting and wonderfully evocative of old New York, Snow in August is a brilliant fable for our time and all time — and another triumph for Pete Hamill.

Brooklyn, 1947. The war veterans have come home. Jackie Robinson is about to become a Dodger. And in one close-knit working-class neighborhood, an eleven-year-old Irish Catholic boy named Michael Devlin has just made friends with a lonely rabbi from Prague.

Snow in August is the story of that unlikely friendship — and of how the neighborhood reacts to it. For Michael, the rabbi opens a window to ancient learning and lore that rival anything in Captain Marvel. For the rabbi, Michael illuminates the everyday mysteries of America, including the strange language of baseball. But like their hero Jackie Robinson, neither can entirely escape from the swirling prejudices of the time. Terrorized by a local gang of anti-Semitic Irish toughs, Michael and the rabbi are caught in an escalating spiral of hate for which there's only one way out — a miracle…. 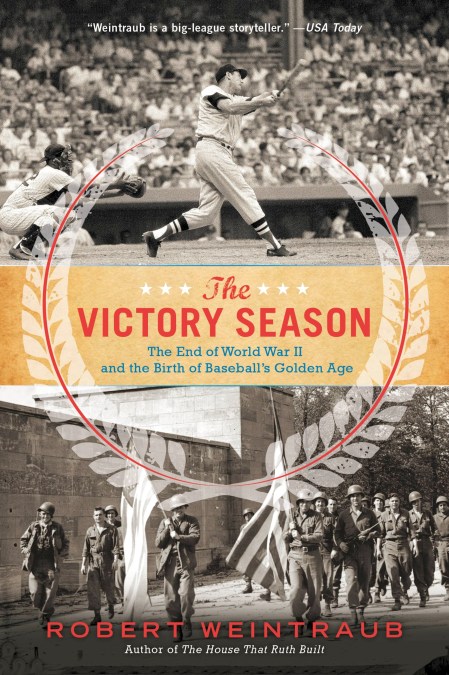 by Robert Weintraub
The triumphant story of baseball and America after World War II.

In 1945 Major League Baseball had become a ghost of itself. Parks were half empty, the balls were made with fake rubber, and mediocre replacements roamed the fields, as hundreds of players, including the game’s biggest stars, were serving abroad, devoted to unconditional Allied victory in World War II.

But by the spring of 1946, the country was ready to heal. The war was finally over, and as America’s fathers and brothers were coming home, so too were the sport’s greats. Ted Williams, Stan Musial, and Joe DiMaggio returned with bats blazing, making the season a true classic that ended in a thrilling seven-game World Series between the Boston Red Sox and the St. Louis Cardinals. America also witnessed the beginning of a new era in baseball: it was a year of attendance records, the first year Yankee Stadium held night games, the last year the Green Monster wasn’t green, and, most significant, Jackie Robinson’s first year playing in the Brooklyn Dodgers’ system.

The Victory Season brings to vivid life these years of baseball and war, including the littleknown “World Series” that servicemen played in a captured Hitler Youth stadium in the fall of 1945. Robert Weintraub’s extensive research and vibrant storytelling enliven the legendary season that embodies what we now think of as the game’s golden era. 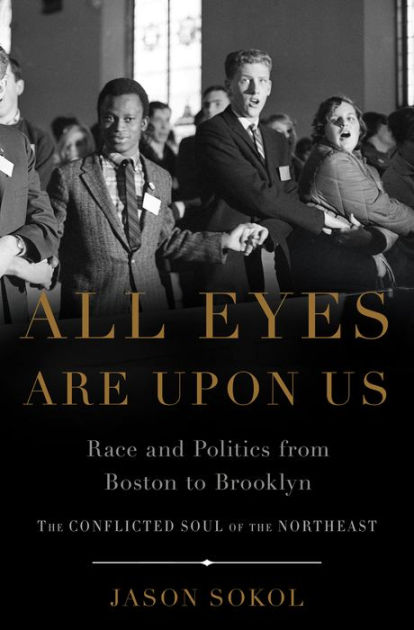 All Eyes are Upon Us

by Jason Sokol
The Northeastern United States — home to abolitionism and a refuge for blacks fleeing the Jim Crow South — has had a long and celebrated history of racial equality and political liberalism. After World War II, the region appeared poised to continue this legacy, electing black politicians and rallying behind black athletes and cultural leaders. However, as historian Jason Sokol reveals in All Eyes Are Upon Us, these achievements obscured the harsh reality of a region riven by segregation and deep-seated racism.

White fans from across Brooklyn — Irish, Jewish, and Italian — came out to support Jackie Robinson when he broke baseball’s color barrier with the Dodgers in 1947, even as the city’s blacks were shunted into segregated neighborhoods. The African-American politician Ed Brooke won a senate seat in Massachusetts in 1966, when the state was 97% white, yet his political career was undone by the resistance to busing in Boston. Across the Northeast over the last half-century, blacks have encountered housing and employment discrimination as well as racial violence. But the gap between the northern ideal and the region’s segregated reality left small but meaningful room for racial progress. Forced to reckon with the disparity between their racial practices and their racial preaching, blacks and whites forged interracial coalitions and demanded that the region live up to its promise of equal opportunity.

A revelatory account of the tumultuous modern history of race and politics in the Northeast, All Eyes Are Upon Us presents the Northeast as a microcosm of America as a whole: outwardly democratic, inwardly conflicted, but always striving to live up to its highest ideals.
Next Page