In late September, the U.S. Department of Treasury announced that it was expanding internet service to Iranians amid a violent government crackdown on peaceful protests.

It’s a potentially surprising role for the Treasury Department to be playing, but Janet Yellen isn’t your average Treasury secretary. She’s the first woman to run the organization in US history and, in the words of a colleague, “the most important woman economic policy-maker in history, and the most important in the United States by several orders of magnitude.”

To give you a sense of how exceptional Yellen is, she was confirmed to the position on January 25, 2021—just 19 days after the insurrection—by a Senate vote of 84-15. By then, the Senate Finance Committee had unanimously advanced her nomination with members of both parties hailing her as the most qualified candidate ever.

At one of the most acrimonious and polarized moments in recent memory, how was Yellen so universally praised?

To get to know her better, we turn to Owen Ullmann, a journalist with five decades of experience and the current executive editor and Washington columnist for The International Economy, a quarterly magazine written for central bankers, finance ministers, financiers, and academics.

Ullmann’s latest book is Empathy Economics: Janet Yellen’s Remarkable Rise to Power and Her Drive to Spread Prosperity to All. From it, we’ve pulled four milestones from Janet Yellen’s remarkable life.

1963: Yellen graduates as valedictorian of her high school class

At least in high school, Yellen benefited from the sexism of the day. Because all of the brightest boys were siphoned off for the special schools surrounding the New York City area, the strongest students at Fort Hamilton High were mostly girls. They comprised 80 percent of the honor roll and ran the school newspaper, literary magazine, and yearbook. Among them, Yellen thrived.

She was the top student in her class of six hundred and would spend Saturday mornings studying geology at the American Museum of Natural History. The only part Yellen didn’t like was the pop quizzes in tenth grade English. She was determined to always be prepared.

Even then, her interest in labor economics was clear. In a newspaper editorial titled “The Last Term,” she wrote about the importance of completing high school to be eligible for a well-paying job, concerned that the million students dropping out of high school would lack the skills needed for the job market.

Sexism quickly surrounded Yellen after she left high school. Though she says she didn’t feel personally discriminated against at Yale, where she earned her PhD in economics, at times the environment was openly hostile to women. During that time, many academic departments, including economics, would meet at Mory’s, an all-male private eating and drinking club. It was only after female grad students protested the practice, forming a gauntlet outside the club and shouting at the men who entered, that the department located another place to meet.

At Harvard, Yellen was a popular and highly regarded teacher who also wrote strong research papers. But, her peers didn’t consider them of the highest caliber, and Yellen was denied tenure. She also found the social atmosphere far less welcoming and inclusive than at Yale. At the time, there were only two other women on the economics faculty.

However, that time did see Yellen produce a groundbreaking paper. In it, she and her co-author argued monopolies can produce bundles of goods, and the price of each individual good is less than if they were all sold separately. (Think of the exclusive sale of season tickets to college football games, even though attendees only want to see a few games.) The paper catalyzed an entire field of economics and has been cited more than 2,100 times.

“There were two vacancies,” Yellen said about the post she assumed, “and I think they did not want both to go to white males. So, my guess is that I was a beneficiary of affirmative action.” Yellen described herself to reporters then as a “non-ideological pragmatist,” and during her Senate confirmation hearing, she repeated the conventional Fed script about inflation inflicting long-run harm to the economy.

At the same time, though, her agenda was clear. “What the Fed should be pursuing is the economic welfare of working people, of all Americans. The central bank has more commonly been known for its links and sympathies with Wall Street and big commercial banks.”

Yellen was confirmed 94-6 for a fourteen-year term as a Fed governor. By this point, Yellen had spent twenty-three years in academia, but the role was quite similar to being a professor. The workday was highly structured, and governors could spend much of their down time doing research on the state of the economy in order to inform Fed policy. They even gave speeches on the state of the economy, much like a university lecture.

Unlike professors, though, the Fed governors wielded enormous power, possibly more than any unelected position in Washington.

Janet Yellen wasted no time making her priorities clear. Instead of speaking to the financial industry, her first out-of-town stop as chair was at a Chicago community reinvestment conference to help economically depressed neighborhoods. Yellen focused on the millions of Americans who had lost their jobs during the Great Recession of 2007–2009, and she highlighted three people in particular: Dorine Poole, who’d worked in processing medical insurance claims; Jermaine Brownlee, who had to quit his plumbing apprenticeship; and Vicki Lira, whose position at a printing plant disappeared when the company shut down.

After the event, journalists discovered Poole had been convicted of felony theft sixteen years earlier, and Brownlee had been convicted of narcotics possession in 2012. Yellen knew at least one of them had spent time in prison—she’d spoken to them before the speech—and she was outraged by the response. “I pointed out that a very large share of Americans—almost a third of adults—have some sort of criminal record. It is a huge impediment to people gaining employment.”

Yellen’s venue of choice, the content of her speech, and her disgust with the backlash signaled from early in her tenure that she was on the side of Main Street, not Wall Street.

What did Yellen do next—and why did she overcome her initial reluctance to become secretary of the Treasury?

For that, you’ll have to read Empathy Economics: Janet Yellen’s Remarkable Rise to Power and Her Drive to Spread Prosperity to All. You can buy it here. 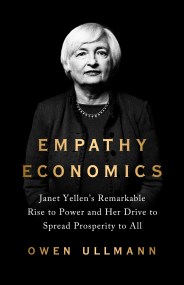 The trailblazing story of Janet Yellen, the Ruth Bader Ginsburg of economics, and her lifelong advocacy for an economics of empathy that delivers the fruits of a prosperous society to people at the bottom half of the economic ladder.

When President Biden announced Janet Yellen as his choice for secretary of the treasury, it was the peak moment of a remarkable life. Not only the first woman in the more than two-century history of the office, Yellen is the first person to hold all three top economic policy jobs in the United States: chair of both the Federal Reserve and the President’s Council of Economic Advisors as well as treasury secretary.

Through Owen Ullmann’s intimate portrait, we glean two remarkable aspects of Yellen’s approach to economics: first, her commitment to putting those on the bottom half of the economic ladder at the center of economic policy, and employing forward-looking ideas to use the power of government to create a more prosperous, productive life for everyone. And second, her ability to maintain humanity in a Washington policy world where fierce political combat casts others as either friend or enemy, never more so than in our current age of polarization.

As Ullmann takes us through Yellen’s life and work, we clearly see her brilliance and meticulous preparation. What stands out, though, is Yellen as an icon of progress—the “Ruth Bader Ginsburg of economics”—a superb-yet-different kind of player in a cold, male-dominated profession that all too often devises policies to benefit the already well-to-do. With humility and compassion as her trademarks, we see the influence of Yellen’s father, a physician whose pay-what-you-can philosophy meant never turning anyone away. That compassion, rooted in her family life in Brooklyn, now extends across our entire country.